I have been known to say, “Give me a topic and three facts about it, and I can BS a five paragraph essay on the subject.” But it turns out, as I’ve gotten older, I have grown quite accustomed to being able to write whatever topic pops into my head, rather than being assigned a topic.

Jamilla asked me to write about motherhood, and the differences between mothering babies and toddlers…and older kids than that.

Oh brother. Where in the world to start?

I’ve hit some milestones in my journey of motherhood lately. I recently relinquished my rights as ‘butt-wiper’ for the last time. My 6-year-old tells everyone he meets that he is now 6 and can wipe his own butt. And all those people look at me like “Since you don’t have to spend time wiping his butt anymore, can you please teach him that it’s not appropriate to tell people about it.” And I look back at them like “Dude, I’ve been wiping one butt or another for the past 14 years. Take a second and celebrate my retirement with me, please.”

I’ve also arrived at the stage where I don’t have to wash anyone’s hair anymore. Granted, I still sniff the boys’ heads occasionally to make sure they aren’t lying when they say that they washed it, but I no longer have to squat down over the edge of the tub and say, “Lean your head back and close your eyes.”

With this new stage of “no more small children” comes other things, though.

Things like much larger clothing items to be washed, resulting in more laundry.

Or the finding of those larger dirty clothes items on the floor. Because when I used to bathe them, I also put their dirty clothes in the hamper…but I am fairly certain my boys don’t know what a hamper is, and if they do know, they are convinced that I need extra patience in my life and they want to help me obtain it by forgetting to make use of the hamper as often as possible.

Also, they have all begun to push the envelope in a whole different way than when they were small. They used to let their rebellion show by sneaking cookies from the pantry…now they come up with code words for inappropriate/curse words.

Example: “Mom! He called me a weasel!”

“Why does that bother you so much?”

“Weasel is code for penis.”

Really? In that moment I ACHED for the old days, when they said “bye-bye” and “mama” and “ball” and none of them knew the word weasel OR penis.

I straight up blew my cool with them. “LOOOOOOOK. No code words are allowed in this house. Any. More. You can say someone is a pain. You can say dang it. That’s it. No more “pain in the abs” or “son of a biscuit” and DEFINITELY no more ‘weasel.” Cut it out. Or I’ll kick your butts.”

So, as I’ve pondered what advice to share with the readers of The Labor Ladies on the subject of motherhood (and all that it implies) I have come up blank.

Because…and let’s be honest with ourselves and each other for a minute, if we can…

THERE IS NO SUCH THING AS PERFECT MOTHERHOOD.

I understand that the news isn’t a shock to some, while it is an entirely appalling idea to others. Trust me. I have had all those feelings.

A few weeks ago, my sister (who is the person in the world (besides my husband) who knows me the best)(And she has three kids of her own) told me that she stopped after three kids because she saw what a crazy person I was with four.

Please take a moment to imagine my horror and humiliation.

I used to be the mom who played games with her kids whenever they asked. We had tea parties. We made homemade play dough. We learned Bible verses. We colored together.

But somehow, in the transitions of life (only one of which was adding a fourth child, and that child cannot be blamed for the crazy person his mother apparently became after his arrival) I grew into the kind of mother who spurred her own sister into deciding three kids were ENOUGH.

The depth of my self-recrimination knew no bounds…for several days, in fact.

And then Jamilla asked me to write on this subject, and as I had been stewing on it already, I felt certain I would have something monumental and life altering to share.

Instead, I have shared with you…stories of my failures.

But…maybe those aren’t really stories of failure, so much as stories of real life.

There’s no such thing as figuring it out. Obviously.

There can be seasons of minimal yelling and easy discipline and all vegetables being eaten on supper plates and all urine making it into the toilet all of the time…but those are only seasons. Everything is. It’s a fluid thing, motherhood, and what worked with one kid, in one season, won’t work forever, or for all kids. Expecting it to, and trying to cram who you are, and who your children are, and who your family is, into the mold that you fit prior to your current stage…well, it’ll just make you all cranky, and bruised, and feeling like failures all of the time.

But, I won’t share them all. You have your own, I’m sure. If you don’t yet…you will.

As I pondered a particularly rough day recently, where everyone was in timeout at least once and we had all cried and no one was allowed to touch an electronic device for the rest of their lives and I was hoarse from yelling, and had resorted to hiding from my children for a few precious seconds…

The Holy Spirit whispered to my heart.

You see? He knows. He knows that we try so hard, and we fail so completely, and we feel utterly miserable and horrified and humiliated and mad and exhausted.

He sees you. He sees me. Our all-wise and all-knowing God didn’t give us the precious little ones by accident. He didn’t gamble that we would be good parents for the children He gave us. He wouldn’t entrust us with His treasures so frivolously.

HE KNOWS WE MESS IT UP. He knew we would before we ever even thought about having kids. And He still gave them to us.

Which says something pretty extraordinary about our God, for one thing. But, it also says something that I want you to HEAR, and remember, in your moments of freaking out and wanting to call everyone around you a weasel.

That’s what it means. He gave us His Spirit along with the blessing of children, and His Spirit will strengthen you, and me, in our moments of total meltdown. And His Spirit will remind us to press into the One who is Peace, and Love, and Joy, and Hope, and Kindness, and Gentleness, and all the rest.

He doesn’t leave us to navigate motherhood alone, no matter our stage, no matter the place in life where we find ourselves, no matter how many times we screw it up and call someone a weasel. He’s still here. He’s enough. Let Him be enough. 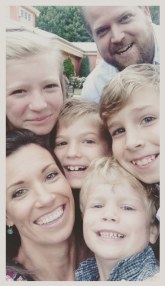 Charity L. Martin lives in Kernersville, NC with her husband, four children, and a cat. In between homeschooling and being generally fabulous, she’s managed to write a book, (His Life for Mine) and maintain a blog about attempting to stay afloat and Christ-centered in the midst of motherhood. We’re honored to have her guest blog for us!